Tracie Peterson is an award-winning, best-selling author of over 95 books. Having given her heart to Jesus at the young age of six, Tracie has always felt called to some form of ministry, and writing fulfills that mission field.

Tracie received her first book contract in November, 1992 and saw A Place To Belong published in February 1993 with Barbour Publishings’ Heartsong Presents. She wrote exclusively with Heartsong for the next two years, receiving their readership’s vote for Favorite Author of the Year for three years in a row.

Throughout her writing career Tracie has found time to speak at writer’s conferences where she has a special heart for new authors. She is often joined by her husband Jim, whose background in history offers new authors insight into research. Besides teaching at conferences, Tracie also at one time managed Barbour Publishing’s Heartsong Presents book line – overseeing the production of 52 books a year. Tracie teaches at women’s conferences around the country and shares her testimony and insight for Christian living through the eyes of an author passionately in love with her Heavenly Father.

Tracie was awarded the Romantic Times Career Achievement Award for 2007 Inspirational Fiction and the 2011 Lifetime Achievement Award from American Christian Fiction Writers. Her books have won numerous awards for favorite books in a variety of contests, including USA “Best Books 2011” Awards, best Religious Fiction for Embers of Love!.

Making her home in Montana, this Kansas native enjoys spending time with family–especially her three grandchildren–Rainy, Fox and Max..

What is your first step in writing your novels?

I always prepare a detailed synopsis. I start with the concept and then grow it to a line or two and then a paragraph and then flesh that out. Eventually I have a chapter by chapter synopsis that I use as a guideline or map to complete the story. The synopsis gives me an idea of additional research that I’ll need, as well as helps me maintain the pacing and develop of the characters.

What are your techniques for maintaining reader interest?

I try to make the character true to their natures and their responses accordingly. I work to keep the book constantly moving forward so I avoid a lot of back story, flashbacks and purple prose.

What is your favorite genre to write? Why?

Historical – especially romance or family saga. I love the various time periods in America and elsewhere. I love showing that there truly is nothing new – that emotional and spiritual problems in the 1800’s are some of the same we face today. I want each of the books to entertain, but also to educate and encourage.

How/why did you start writing?

I’ve written most of my life. My mother used to give me a pencil and paper and tell me to write a story in order to keep me quiet in church. Afterward she would have me tell her the story. So storytelling has been a part of my life since I was little. I tried to get published in my late teens, but that didn’t work so well as I still had much to learn. Then I had a family and put aside writing for a time, but always read and gathered ideas for books I’d like to write. In 1992 I sent a letter to Barbour Publishing asking for guidelines. I had heard in one of my writer’s meetings that you should also include what you were currently working on or what you had readily available. I told the publisher that I had completed a Christian historical romance and if they would like to see it, I would send it in. Two weeks later I got call from the editor of new line called Heartsong Presents. He ask if I was interested in writing contemporary romance as at the moment he had enough historical. I really wasn’t, but he convinced to try my hand. When I turned that synopsis in, I reminded him that I had a historical romance ready to go. A couple of weeks later – he called and said they’d like to see the historical. Shortly thereafter Barbour Publishing bought it and it became one of the earliest books in the Heartsong series. Later, I switched to Bethany House Publishers because I wanted to write longer novels and at that time Barbour didn’t do that. Now I write exclusively for Bethany House/Baker Publishing. I write as a minister to share the Gospel of Jesus and to offer Biblical application and encouragement. My goal is that through the books the reader will fall more deeply in love with God. 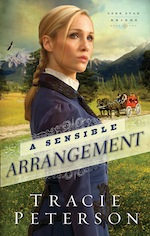 Marty Dandridge Olson is a widow looking for a way out of Texas. Widower Jake Wythe has secured a job as a bank manager in Denver, only to discover that the bank board wants him to be a married man. With Texas in his roots, he advertises for a Lone Star bride, and Marty answers the call. They both agree they are done with romance and love and will make this nothing more than a marriage of convenience.

Marty works to carve out a new life in high-society Denver as Jake works to guide the bank through a collapsing economy. But when money goes missing at the bank and accounting discrepancies point to Jake, he must find a way to prove his innocence. Yet all he wants to do is go back to Texas and own his own ranch. Marty, on the other hand, owns a ranch–one she’s never told her husband about. She hates Texas because it represents the losses in her life. But as the couple grows closer and love begins to bloom, Marty realizes she needs to tell Jake the truth. Can she come to terms with the past and her anger toward God in order to make room for love?

Gwyn Hillerman acts as a nurse at her father’s medical practice in 1935 rural Alaska. Her family life has been rough ever since her mother, hating Alaska, took Gwyn’s younger sister back to Chicago to live.

Dr. Jeremiah Vaughan finds his life suddenly turned upside down when his medical license is stripped away after he loses an affluent patient. In a snowball effect, he then loses his engagement to Gwyn’s sister, Sophia. When the government decides to send a group of families to Alaska in hopes of making a better life, Dr. Hillerman sends a letter urging Jeremiah to join his practice. Thinking his secret would be safe in the isolated Alaska Territory, Jeremiah agrees.

Gwyn and Jeremiah soon recognize a growing attraction to each other. But when another suitor enters the scene and Jeremiah’s secret is revealed, their hopes for a future are threatened.