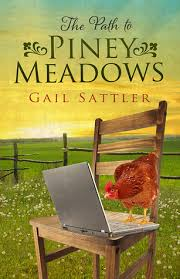 On a whim, Chad Allen quits his job…on Christmas Eve. Shocked by what he has just done, Chad gets in the car and drives until he runs out of gas. Now stranded in a small town where the only open building is a church, Chad finds himself in the midst of the Mennonite town of Piney Meadows. The lifestyle is simpler than what Chad had previously been used to in the big city but he discovers that while he desires the simplicity Piney Meadows has to offer, Anna, a young woman in the town, desires to see what the big city has to offer. Both Chad and Anna must discover God’s plan for them…whatever that might be.

A PENNY FOR MY THOUGHTS:

For readers familiar with Gail Settler’s previous Piney Meadows adventure, “The Narrow Path”, this novel will come as a pleasant sequel. Although the books do not need to be read in sequence, it may be beneficial as “The Path to Piney Meadows” picks up where “The Narrow Path” left off. Settler creatively builds off of the first novel by taking a minor character that is only mentioned in passing in the first book and expanding the character into becoming the main focus of the sequel. The reader will enjoy the humor found within the novel as well as appreciate the many opportunities presented to pause and consider God’s will for each of us.

A BRIEF INTERVIEW WITH THE AUTHOR, GAIL SETTLER:
Who encouraged your love for reading and/or writing when you were growing up?

I probably have the same reply as many other authors. My mother! I have always loved to read and all through my school years the library was always a weekly visit. First, when I was small, library visits were with my mother and my little brother (who still loves Curious George and all his adventures), then with my friends as I became a teen. I didn’t begin writing until much later in life – I was married with children, and the company I worked for closed, and that started my journey to writing.

It seems like most authors have quite an interesting journey to publication. What did you do in your “former life”?

At first I thought I “former life” was the same as most people, I worked, got married, had kids. But then I thought harder. My journey to publication came quickly, and that caused a huge change in my life, mostly of time management. As well, I find the reactions of people who know me interesting when they find out that I’m a published writer. Most don’t find it strange, even though I’m the only one they know who is a published author. I realized that I’ve always marched to the beat of a different drummer. For example, last Halloween, at work I dressed up as a pirate, with a hat and long black hair sticking out, and I sewed a toy parrot to my shoulder and walked around like that at the office all day. Mid-afternoon the Assistant General Manager told me that she just noticed that it was Halloween. My thoughts were, you mean I’ve been walking around all day with a parrot on my shoulder, and she didn’t think that was strange?

How much research did you have to do about the Mennonite community before writing this book?

Not that much. I have been attending a Mennonite Brethren church for over 20 years, so I know a lot of Mennonite people. Many are quite conservative, and some have come from that background. As well, a friend I met online came from exactly the place I set my book – God had a plan in that friendship, I am sure of that. So I have a network of people all around me who can answer pretty much any question I have.

Many readers will relate to Chad and Anna, who are both feeling “stuck” in their own way. What is your advice to these readers? What will they learn from these characters?

My advice is to not be afraid, and follow God’s leading. And sometimes, God will close a door, but open a window. When that happens, don’t go banging on the door, but accept it, and look for a different path that God may be directing you to. That’s what both Chad and Anna did. Chad found himself a long way from the place he’d called home, and God gave him a way to stay there. He had his struggles, but he also had many rewards. Likewise, Anna worked hard to prepare herself to leave, and when she was ready to move on, she found that her new skills and relationship were the things that got her ready to stay, and be happy there.

What do you hope readers will take away from reading “The Path to Piney Meadows”?

Knowing that life seldom works the way we have made our plans, but God has a plan, and be open to receive it.

What’s next for you? Where can readers find out more about you?

I’m not sure what’s next. I have a 3 book series in the works for Harlequin Heartsong, and after that, who knows. All I know is that I’ll always be working on something.

1 thought on “The Path To Piney Meadows”