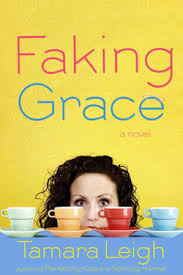 Maizy Grace Stewart recently moved to Nashville after a fiasco at her last job in Seattle. Now, with only part-time work at the Nashville newspaper, Maizy is forced to get creative. After slapping a Christian bumper sticker on her car and adjusting her name to Grace, Maizy Grace (oops, sorry-just Grace), applies to a Christian publishing company. The only problem is now she needs to portray herself as a devoted Christian which means she is definitely…faking “Grace”…

A PENNY FOR MY THOUGHTS:
Tamara Leigh presents an LOL, sarcastic yet witty novel. Just when you think Maizy…um…Grace…has done everything imaginable, she pulls out another unbelievably hilarious move. Of course, considering that she is taking advice from the ‘Dumb Blonde’s Guide to Christianity’ (or affectionately known as DBGC), things are bound to get crazy! Top it off with a little dog, a grandma with a brand new boyfriend, a co-worker with a British accent and a new BFF causing a hair disaster…let’s just say prepare for a side aching laugh that leaves you gasping for breath.